Posted at 20:21h in Upcoming Events by Randi 0 Comments

There is few things more exciting on s Sunday in October than an Eagles vs. Cowboys match up! Join us at the corner of Fankford & Cottman from 12-3pm for a WIP GoBirds Podcast and Live Show tailgate party featuring WIP host John Barchard and James Seltzer. Listen as they talk Eagles in the pregame show live . The festivities are FREE and include, tailgate games, the WIP Prize Wheel, food and fun for all.

WIP Sportsradio Midday Host and former Eagles player, Jon Ritchie will be there for photos and autographs! Plus special guests the Eagles Cheerleaders. Ritchie played for the Eagles 2003-2004, and earned the respect of the fans for his hard nose work ethic. His currently can be heard each day on 94.1 with his co-host Joe DeCamera talking Philly football.

Rob Dunphy became an internet sensation when he showed off his Philly tattoos at the Eagles vs. Green Bay game. Picked up by several local and national news and sports channels, Rob is using his instant fame to raise funds for a local charity, Storm the Heavens. Mayfair business owner, Mike Nemo told Rob he would finish his tattoos for FREE if Rob raised $10,000 for a charity of his choice. After quickly raising more than $14,000, Rob decided to expand his efforts and is looking to raise $100,000. This Sunday, Rob will be at the Eagles Tailgate Party signing autographs, posing for pictures and sell his exclusive t-shirt, which he will donate a portion of the proceeds to Storm the Heavens.

The game is going to be intense with both teams looking for a win after a week of losses. The Inside the Birds team is starting at 7:00pm, with Eagles talk and trivia. Kickoff is at 8:20pm! Watch and discuss the game with insiders Geoff Mosher & Adam Caplan. Enjoy an all you can eat buffet, including Chickie’s and Pete’s famous crab fries, chicken cutlets, fried mozzarella, roast beef and roast pork sandwiches plus take advantage of drink specials. Stick around for the live post game podcast with the Inside the Birds team of Geoff Mosher & Adam Caplan.

Watch the game with Special Guest, Eagles alumnus and inspiration for the movie “Invincible” Vince Papale plus get photos and autographs. 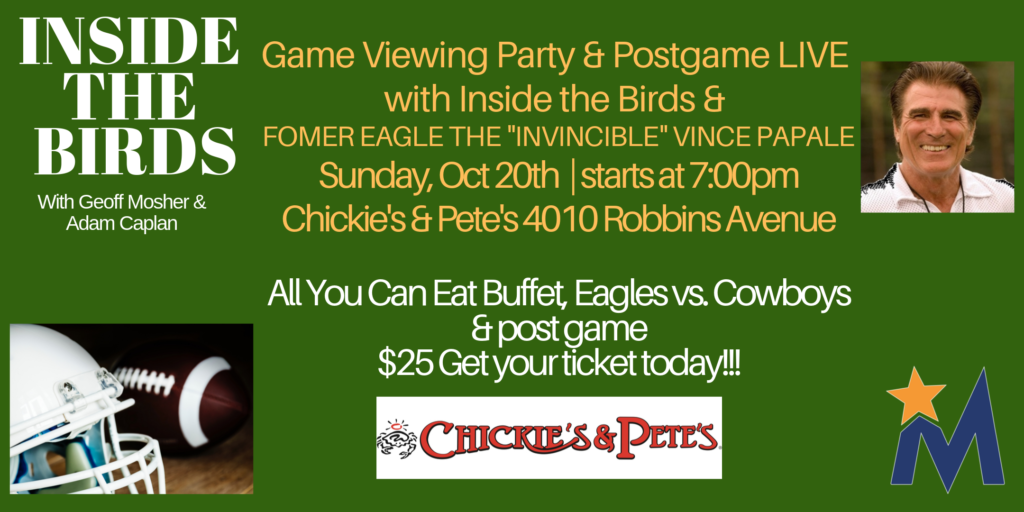